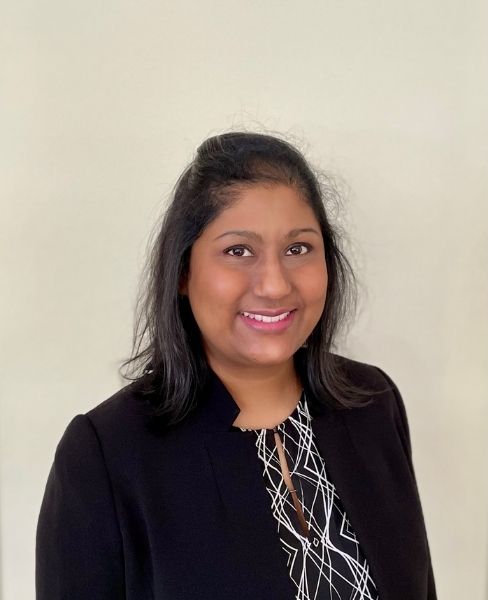 Dr Shiva Senathirajah grew up in Perth where she graduated with a Bachelor of Dental Science with Honours from the University of Western Australia. Shiva worked as a general dentist in a private practice in Perth for six years.

Shiva then moved to Melbourne where she obtained her specialist qualification in orthodontics through the Doctor of Clinical Dentistry programme at the University of Melbourne. Shiva is certified with the Australasian Orthodontic Board and holds membership with the Royal Australasian College of Dental Surgeons and the Royal College of Surgeons Edinburgh.

Shiva participated in the Charley Schultz Resident Scholar Award programme in the United States of America and was also awarded first prize for the TP Postgraduate Clinical Award.

Shiva loves being an orthodontist and feels it is a privilege to work together with patients to transform their smiles, which can be enjoyed for the rest of their lives.

Shiva is a member of the following organisations:

Fill Out the Form and Press Send!

Send us an inquiry with details about the type of Orthodnitc care you require with suggested times around avaiabity and we will get in touch with you promptly. Or just click the number in the top right of this website to make a quick booking over the phone.

Google Rating
4.9
Based on 67 reviews

Christine Hallauer
05:02 08 Sep 21
I’ve had a great experience with Dr Anthony Hopkins and his team. His front desk staff were very friendly and helpful, his dental nurses have taken the time to thoroughly explain each step of the way. I highly recommend Dr Hopkins. I’m looking forward to my new smile.

Amy Hotchkin
22:43 28 Jan 21
The Oasis team knows how to give good service and for me that is priority no.1 in any business. My daughter and I both recieved treatment, our smiles look incredible. Thank you Team Oasis. 🏝

Rebecca Chester
08:42 10 Dec 20
Dr Anthony and the girls were absolutely great. Always pleasant and nothing was too big of an ask. I would highly recommend to anyone!

Narintorn Sesangjun
07:16 12 Nov 20
The Dental and staff are friendly and helpful

Louisa Syder
01:38 07 Sep 20
My daughter has just recently had braces fitted she was very nervous but all staff here were excellent nothing is too much trouble I would definitely recommend Oasis Orthodontist 👍

Michelle Polette
06:48 11 Oct 19
Highly recommend Dr Hopkins, great friendly staff all around in a nice new modern practice. It was nice to go to a dentist/specialist that was not pushy with going ahead with treatment and was very informative with the dental treatment required for my situation , very helpful and friendly staff with myself and kids when receiving treatment :)

Ann-Marie Baxter
06:44 17 Apr 19
What an amazing Ortho! He is kind and gentle and takes his time! Simply wonderful!

Yul TL
02:31 31 Mar 19
I had a fantastic experience and received very outstanding services from this clinic I attended for the first time. My retainer broke suddenly and it was hurting me badly since it was a permanent 1. I needed an emergency appointment. Despite fully booked until next month, they kindly squeezed me in to see Dr Anthony Hopkins as soon as there was a cancellation.He meticulously removed the broken pieces of my permanent retainer and ensured there was no glue left behind. He also explained about the different types of retainer I can use which I've never been explained before and I was just using what was suggested. He also mentioned about some issues with my gum which was so subtle that I don't notice and referred me for further assessment.I had to do some scans which also amazed me because of the advance technology they use. The process was entirely painless and I did not feel uncomfortable at all. Furthermore, his staff Roxanne, Bryony and Alrie were so lovely making my experience even more pleasant. I would definitely recommend Oasis Orthodontics to anyone who needs braces!

Devi Watt
05:35 13 Mar 19
Dr Anthony is a pure gentleman. My kids love his nature and that he doesn't hurt. The practice is quiet and you're not treated like huddled cattle. Each visit I felt my opinion was valued.

Amy Miller
04:37 12 Mar 19
I cannot recommend Dr Anthony and his team highly enough. They make my daughter feel relaxed and cared for and her treatment is working really well. Thank you.

Claire Linfield
08:26 11 Feb 19
Antony, Roxy and Bryony are a fantastic team. Friendly service, professional and very welcoming. I would recommend them for any orthodontic care!

S n o w y A k a r i
05:21 15 Jan 19
Suitably impressed with Antony, Roxanne & Briony. A comfortable environment & Antony's manner with my daughter is calm & gentle. She comes away unfazed. Would highly recommend Oasis!😁

West Wing Butler
23:24 21 Nov 18
Lovely, knowledgable team who made my son feel very comfortable and relaxed. Everything was explained to him fully so he understood the whole process and what the results would be. Highly recommend these guys!

Carla Senior
02:14 10 Oct 18
Great friendly service. Very welcoming professional and caring. Made my son feel really comfortable and happy with the work carried out. Would happily recommend their services.

Bee
11:30 24 Jun 18
Absolutely amazing! I would recommend anyone looking at getting braces to go there

Sacha Dewit
07:05 09 Jun 18
Quality, personal AND professional!We came to Oasis after a bad experience somewhere else. Anthony and Roxanne were amazing with my scared teenager and made us both feel welcome and valued. My daughter now walks in with confidence and knows they are looking after her. Will definitely be bringing the second teenager here too!

Linda Furfaro
06:43 15 Nov 17
Amazing Orthodonitst - gave me a smile I’ve always wanted with Invisalign . Would recommend him to anyone .

One Mob Studios
13:30 26 Oct 17
Outstanding customer service and thoroughly informative. We are so excited to be using this amazing business to help change our daughters life. Highly highly recommend calling Roxy and Anthony today for all of your orthodontic work

Gabriel Puerta
06:12 19 Oct 17
Excellent customer service. Professionalism at the top.We are so satisfied and will come back definitely.

Ian Edwards
02:29 18 Oct 17
Very friendly service and we were given plenty of time to discuss any concerns we had.

Ol Harrison
02:31 10 Oct 17
Have done some work at Oasis Orthodontics and looks to be a state of the art facility with very friendly staff. Would highly recommend!

Livii Thomson
02:06 10 Oct 17
Lovely and friendly staff with a very contemporary setting! Such a convenient location too. Highly recommend.

Roxanne Rudden
02:51 09 Oct 17
I have known Dr Hopkins for over 10 years and I highly recommend his expertise. He is a very caring, honest and gentle Orthodontist. I have the pleasure of working alongside him now at his very own private practice.

Fiona Moore
05:20 07 Oct 17
Am delighted with the whole Oasis experience so far, can already see the results after only a few weeks. All staff are very kind, friendly, knowledgeable and sensitive to my needs. They are very accommodating making appointments around me working full time. Dr Hopkins was recommended to me by Sam from Diamond Smiles. This was after many years of being disillusioned by other Northern Suburb Orthodontists, with Oasis I feel like a person and not just another money making number on the books. Am now looking forward to my visits over the next year or so. Thank you Oasis

Kya Pedrick
23:38 01 Oct 17
I have worked alongside Dr Hopkins for 1.5 years now. He takes great care in what he does and genuinely wants the best results for each of his patients. I could not reccomend him enough to anyone seeking orthodontic treatment. 😊

lovelyn james
23:03 21 Sep 17
Dr. Anthony Hopkins is an experienced and caring orthodontist! He is very thorough with his treatment planning and will not compromise on the quality of his work.

Alex Feast
11:49 20 Sep 17
Dr Hopkins is a fantastic orthodontist. Always puts the patients needs first, makes you feel at ease and very relaxed. I was very Impressed with the results I was given and I m made up with my smile 😁 😁😁

Sasha Bisgaard
10:56 20 Sep 17
I have seen Dr Hopkins as an adult to straighten my lower teeth. The process has been really easy and much quicker than I had anticipated. I was nervous about starting as I felt self conscious having braces as I'm not a teenager anymore. Dr Hopkins explained my options and introduced me to Invisalign which are almost invisible. This was the option I went for and I couldn't be happier. The practice is all new and all the staff lovely. I would highly recommend Dr Hopkins and his team :)
Write a review